What Is Hard of Hearing Vs. Deaf 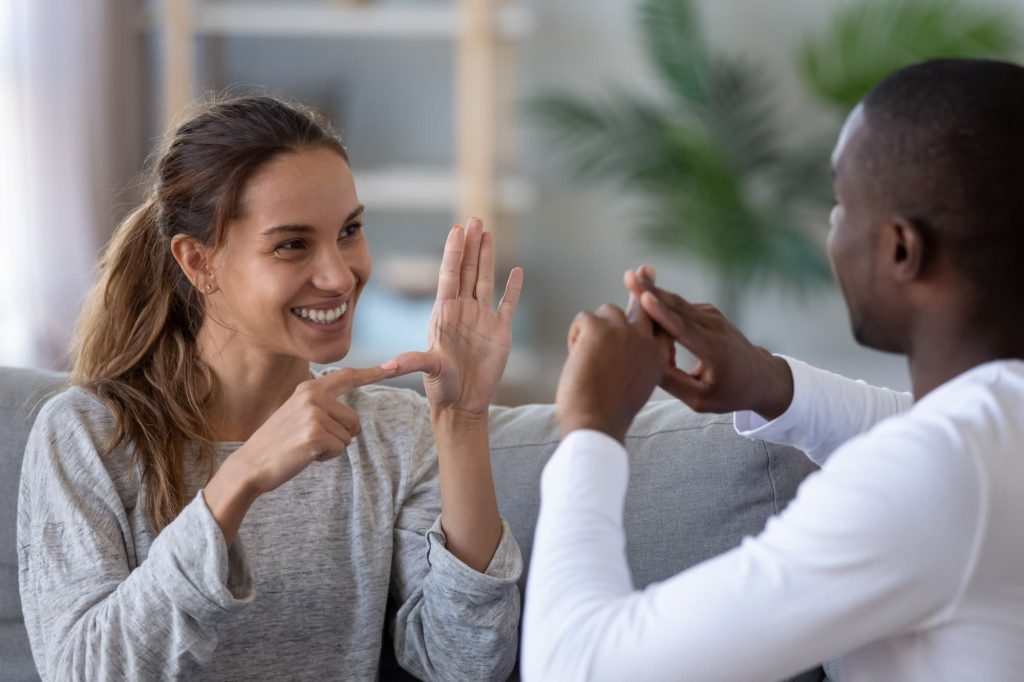 There are many terms used to describe hearing loss. Many people in Texas use terms such as hard of hearing, deaf, and hearing impaired interchangeably. However, they all mean different things, and some are considered more acceptable than others. Learning about the different terms, what they mean, and how they are used helps you describe hearing loss conditions accurately and show respect for the deaf and hard of hearing community.

What Does Hard of Hearing Mean?

When a person cannot hear, or the person’s ability is not at the level that is considered normal, doctors describe them as having hearing loss. The term is widely accepted even though some people are born without the ability to hear well or to hear at all and thus have lost nothing.

Hearing loss occurs to several different degrees, here listed from the most severe to the least severe:

What Causes People To Be Hard of Hearing?

Many people have normal hearing at birth but become hard of hearing later in life. An injury to the ear or the head or exposure to loud noises can cause acquired hearing loss. Hearing loss can be a side effect of certain medications or caused by infections such as meningitis, measles, or otitis media. Hearing loss can also occur with aging as structures in the ear degenerate over time.

Are There Treatment Options for People Who Are Hard of Hearing?

People who have mild or moderate hearing loss may not require any treatment. They often carry on their everyday lives with only slight modification of activities. However, people with hearing loss that interferes with day-to-day activities in Laredo may benefit from certain treatment options, such as hearing aids or assisted listening devices. If the hearing loss is due to a condition that affects the structures of the ear, surgery may be able to correct the abnormality and restore hearing.

Not every patient is a candidate for hearing treatment options. Diagnosing the cause of the hearing loss with audiological examinations may suggest a possible treatment course.

What Does Deaf Mean?

When people are born deaf, or become deaf in early childhood, the inability to hear can prevent them from learning spoken language. Many deaf children learn sign language early and use it as their primary means of communication. Different countries have different sign languages, each with its gestural vocabulary, grammar, and syntax. In the United States, American Sign Language is the most prominent.

What Is the Difference Between Congenital Deafness and Acquired Deafness?

Acquired deafness occurs when a person is born with the ability to hear but experiences profound hearing loss at some point later in life. These people are more likely to consider deafness to be a disability and to seek treatment options to restore hearing, if possible. The word “deafened” is sometimes used to describe people whose profound hearing loss is acquired rather than present at birth.

People who are born deaf are more likely to view it as a difference rather than a disability. They do not feel a sense of loss over something they never had, and their common language of ASL (or whatever sign language is used in their country) binds them together and gives them a shared cultural identity. Most people born deaf do not see it as a medical condition to be treated but as part of what makes them who they are. For this reason, suggestions that they should seek treatments that would allow them to hear are often met with resistance, although some choose it voluntarily at some point during their lives.

Some people in the deaf and hard of hearing community use the word “Deaf,” capitalized, to describe someone who views deafness as a marker of cultural identity as opposed to “deaf,” which is used generally to describe a functional inability to hear.

How Do Deaf People Communicate?

Many people use several of these methods in combination regardless of whether they are culturally Deaf or their profound hearing loss is acquired.

What Does Hearing Impaired Mean?

“Hearing impaired” is a more general term applied to both deaf people and people who are hard of hearing. Because it can be used to describe any degree of hearing loss, it is not very useful. It is also controversial within the deaf and hard of hearing community, with many considering it inaccurate at best and insulting at worse.

People who use the term “hearing impaired” do not intend to be offensive. Indeed, it was intended to be a politically correct term used to avoid offending. “Hearing impairment” was intended to replace terms like “deaf” and “hard of hearing” because it was believed that these terms were outdated.

However, many people who are deaf and hard of hearing, especially those who identify as part of the Deaf community, reject the term “hearing impaired” because it implies that the inability to hear is substandard and that the inability to hear is a hindrance that needs to be fixed if possible. On the other hand, “deaf” and “hard of hearing” are regarded as neutral terms with no negative connotation and are considered more acceptable.

Oliveira Audiology & Hearing Center provides multiple services to provide the best hearing care available from a convenient location in Laredo, TX. Make an appointment today to visit us for diagnosis and treatment.